Uli (pronounce as “Ouly”) was born and raised in Vienna, Austria, Europe. Her early life was influenced by classical music (opera and concerts) and literature (books and theatre).

Uli holds a PhD in theoretical physics from Vienna University of Technology. In her doctoral research study she concentrated on superstring theory that aims to explain the very foundation of the universe we live in. Due to her excellent grades she won a scholarship as doctoral student at the Theory Division of CERN, Geneva, Switzerland, Europe. In addition to the scientific impact these years at CERN as an international organisation nourished her interest in different people, different backgrounds, different experiences. (According to Wikipedia 113 nationalities are represented at CERN!)

Uli gained broad business experience during her years in Austria’s leading banking and consulting companies. Her eagerly learning mind soaked risk management concepts and the corresponding mathematical models, while she enjoyed to keep on working in international teams. In her jobs she acted as interface between project stakeholders, thus deepening her communicative and social skills.

Uli dove into the next sector of society when she decided to volunteer her time for communal politics – again she focussed on numbers, budgets, and financial issues. She enjoyed to give her leadership skills as her party’s fraction chairwoman in municipal council. She acquainted herself with public relations and social media networking. In addition, these years of political engagement were Uli’s training camp for public speaking.

Uli followed her intuition and her heart, when she decided to become a coach and trainer. In her coaching thesis she formulated her vision: Individuals live their lives full of confidence, they follow their own path. Uli’s heart-felt wish is to accompany each coachee to a state of confidence and trust with a holistic approach. She works as self-employed coach, trainer, and speaker with the whole spectrum of responabilities of a company founder and owner.

Uli declares herself as an evolutionary – a person contributing consciously to human evolution of consciousness. To explain this inner evolution of humankind, she draws on the integral model Spiral Dynamics. Teachings on the ancient knowledge of Huna (Hawai’ian) were Uli’s initiations into a spiritual world view.

Now Uli is rooted in an international circle of female spiritual practitioners gathering around Chameli Ardagh and her Awakening Women Institute. Out of this lineage sprout Uli’s temple events: Working in the timeless women’s circle nourishes sisterhood and spiritual devotion to the vast Mystery of Life.

Uli is deeply thankful to her dear friend Harald Hutterer who introduced her to the notion of vocation or calling, thus being the doorway to her current favorite coaching area. The dharma coaching process to destill one’s calling into a single sentence is the result of Uli’s autodidactic studies of her own life. 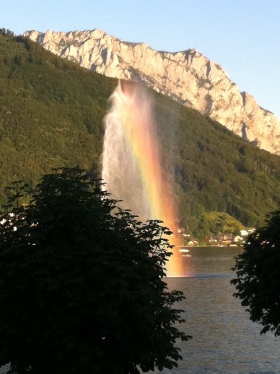 Uli has been a teacher throughout her life. She loves to witness individuals blossoming into a deeper understanding or knowledge. To uplift others by transmission of information or inspiration is a deeply nourishing experience for Uli herself. In her activities she always aims to combine mind and emotion, brain and heart.

Uli’s dharma sentence stresses this bridging aspect of her life:

Privately, Uli is married and mother of three children. She loves her physical garden and the books on her shelf.

To get to know Uli even better, meet her on Facebook – Xing – LinkedIn or visit Uli’s German website weripower.

Feel free to contact Uli for any further information:

is an enthusiastic researcher investigating how to reconnect spirituality and everyday life. She is happy to welcome you here in sacred Dharma Garden.
Join 38 other subscribers